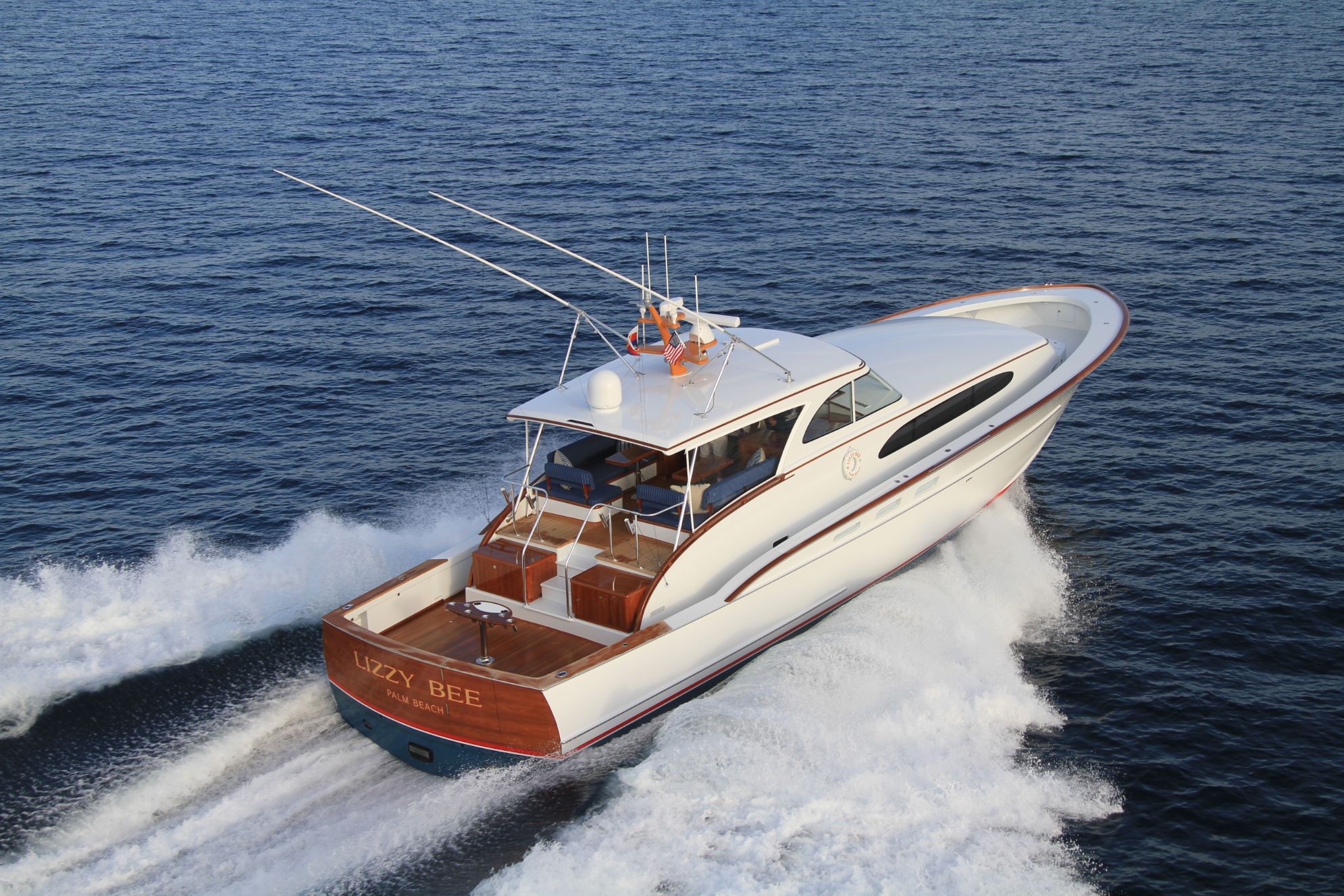 Launched: 2014
Launched in 2014, Lizzy Bee is the first custom sportfishing boat to come out of our new yard in Palm Beach Gardens, FL. Powered by two 900hp Volvo Penta IPS1200 pod drives, she is as maneuverable as she is efficient, and burns 47 gph at a cruise speed of 26 knots - 87.5 gph at a top speed of 39.5 knots. Built for serious fishing, her large cockpit and walkaround design allow for 360-degree fishing for multiple anglers. Her four-stateroom layout leaves ample room for relaxing and/or entertaining in the midship salon, and a full-beam master includes a private head, settee, and vanity for owner comfort on long trips. A composite superstructure and extensive carbon fiber elements were used during construction, adhering to our commitment to unmatched performance and innovation.
Details

Our largest boat built to date when launched in 2015, and the second Rybovich named Persistence, she is regarded as one of the most beautifully and technologically-advanced long range sportfishing boats ever built. Built to fish around the world with the comfort of a megayacht and the speed of today’s high performance boats, Persistence fishes like a small sportfish but holds all of the comforts expected of a boat much larger. Equipped with four staterooms and separate crew’s quarters, each with its own en suite head, her bookmatched golden teak interior immediately turns heads. Powered by two MTU 16V2000M94’s rated at 2600hp each, she effortlessly reaches 47+ knots and comfortably cruises at 38+ knots. 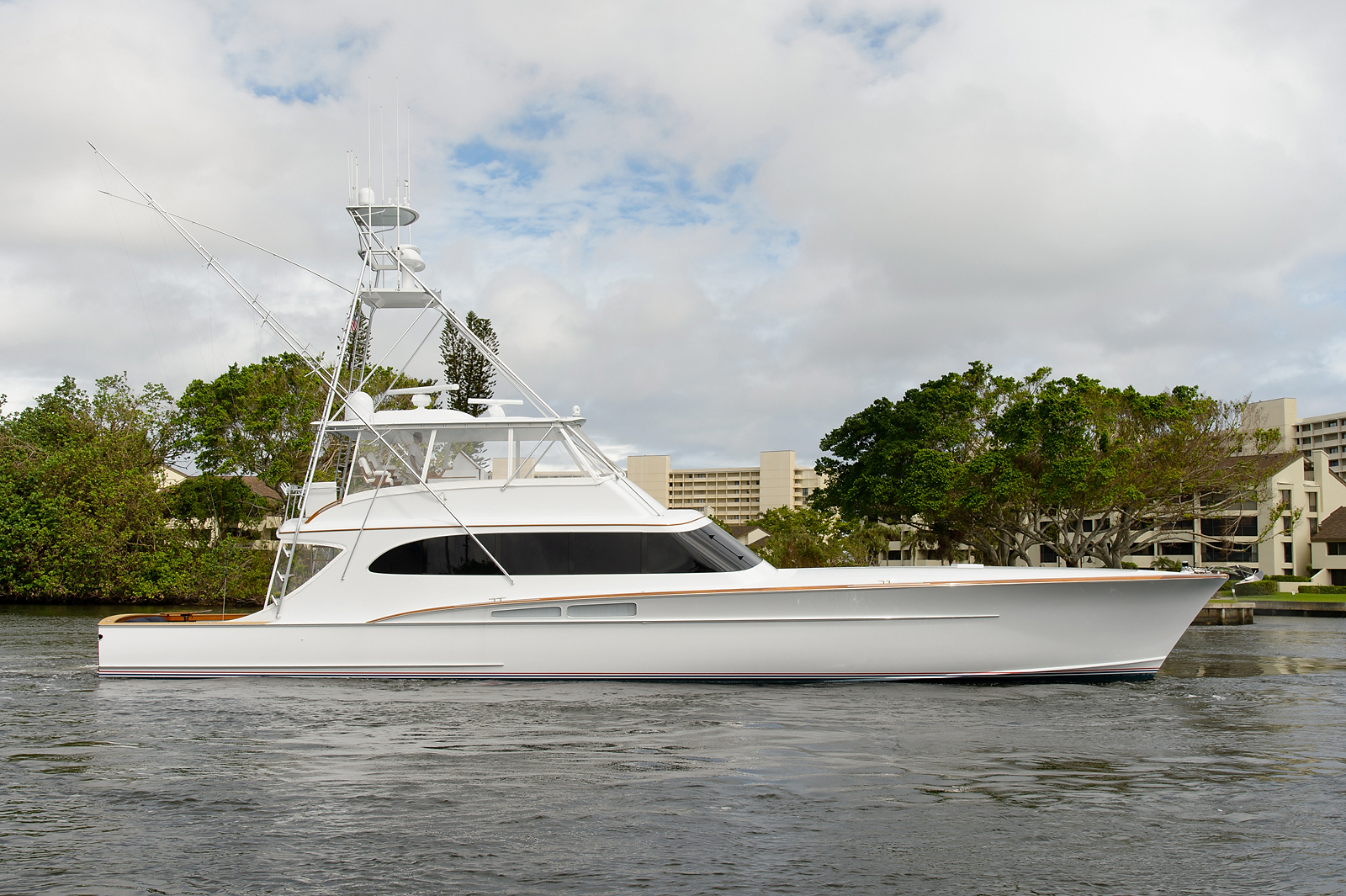 Launched: 2016
The third boat to come out of our new yard, Lady Rebecca is the perfect combination of efficiency, fishability and comfort. Her twin Caterpillar 1925hp C32 ACERT’s provide an amazing balance of speed and efficiency, allowing her 2,000 gallon fuel capacity to take her wherever her owner chooses. Our only boat ever built with a black walnut interior (as chosen and cut from the owner’s farm in Pennsylvania), she will always stand out. She is equipped with all of the modern technology expected of a high performance sportfishing boat, including a Seakeeper, and her three-stateroom layout leaves ample room for exploring with family or friends.
Details

Launched: 2018
Ready to take on any exploration, No Agenda is one of the most prepared long-range sportfishing yachts ever built. With redundant systems throughout, 3,100 gallons of fuel, and extensive refrigeration/freezer, pantry, and pump room space, she can handle any trip that a roving fishing program could dream up. Her four-stateroom/four-head layout allows plenty of room for friends and family, and her large cockpit is a fisherman's (and mate's) dream.
Details 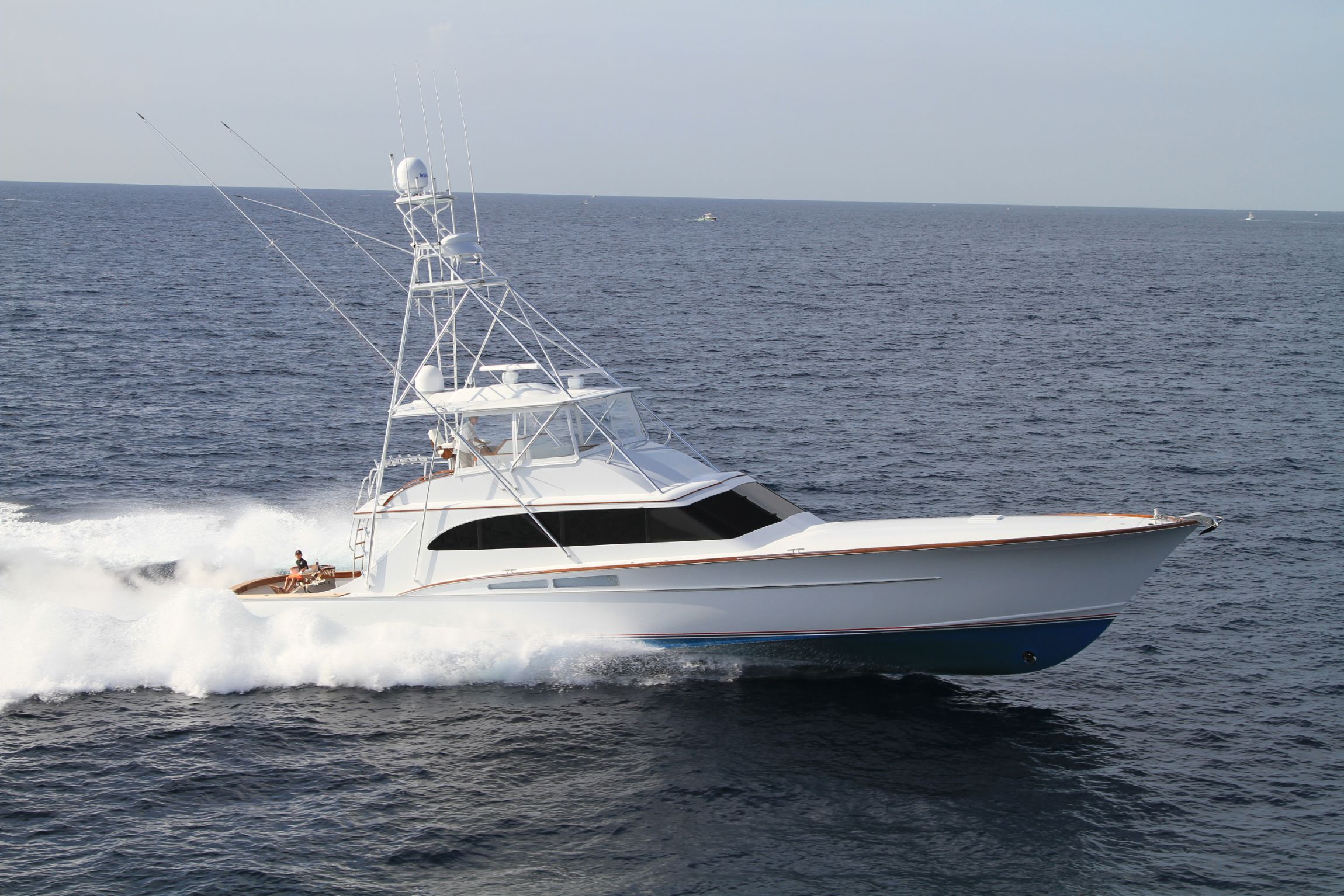 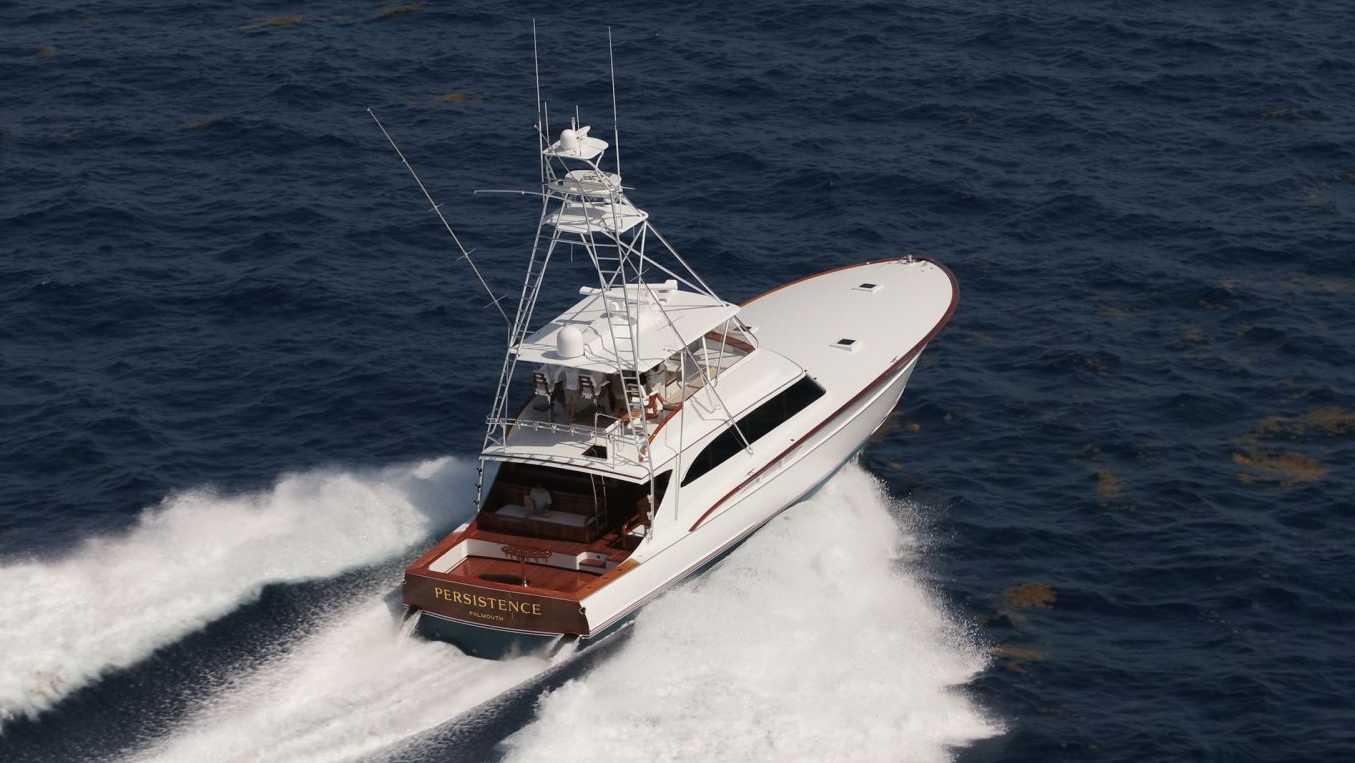 Launched: 2019
The third Rybovich for this specific owner and the culmination of 130 hulls of experience, Persistence is the epitomy of the top-of-the-line custom sportfisherman. With a top speed of 50 knots and a cruise speed of 40 knots, she is one of the fastest custom boats ever built and, paired with an unmatched attention to detail, she would impress the most discerning owner or captain. A four-stateroom, five-head layout is matched with the most technologically-modern systems ever installed on a sportfish, and the beautiful craftsmanship that can only come with a Rybovich.
Details

Michael Rybovich and Sons Hull No. 6 is a 94-foot enclosed bridge, which is designed to fish anywhere in the world in total luxury, thanks to a state-of-the-art power management system and redundant systems throughout. The design features a full-beam master with side windows disguised as engine air intakes to allow in natural light without compromising the look of the hull from the outside. This build includes room to sleep up to eight guests and four crewmembers, making it the largest built by the Rybovich family to date. 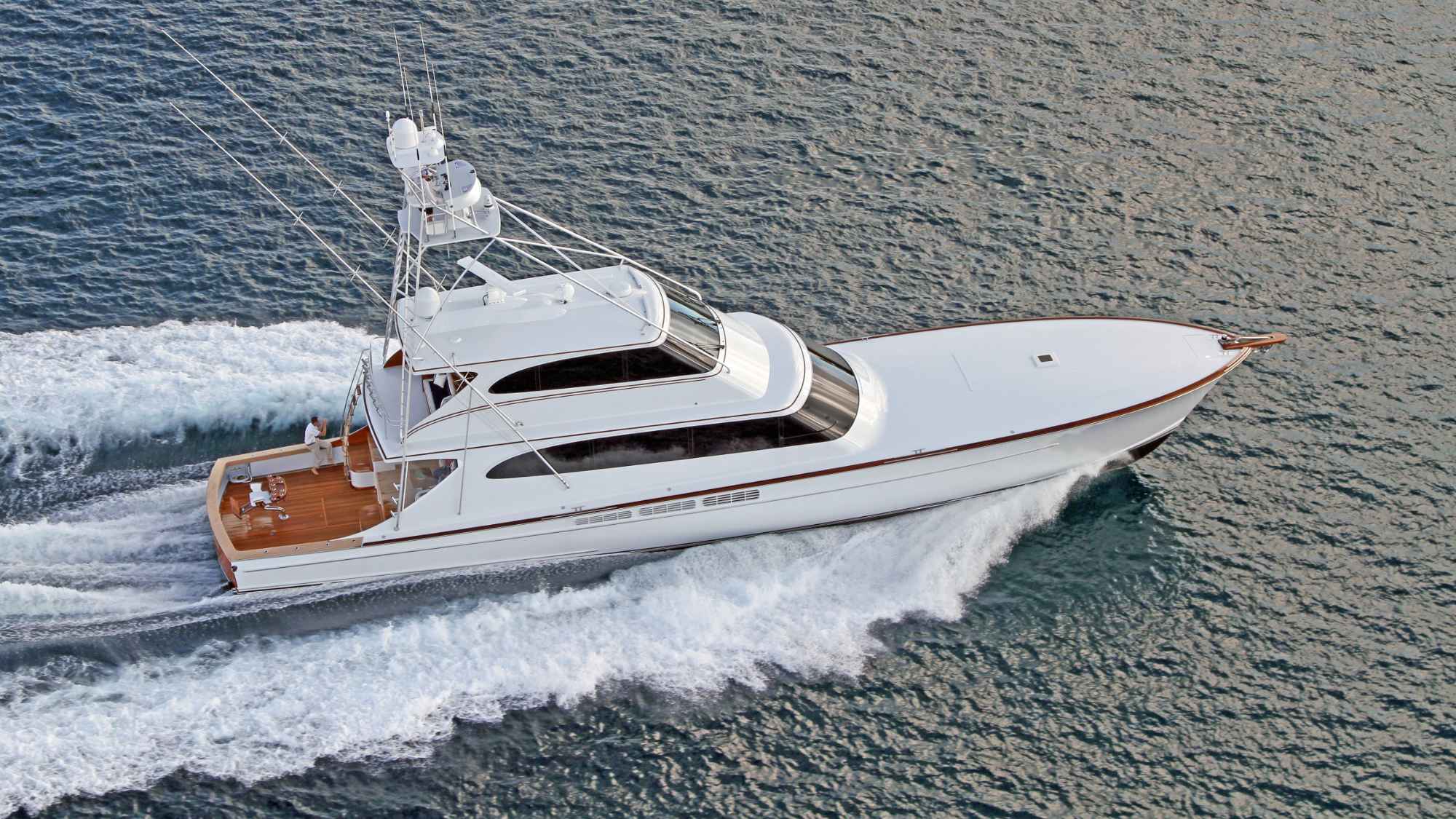